The future of the Northern Strand bike highway is uncertain.

With the seasonal depression and weather-induced dread of travel slowly lifted, summer brings with it a new kind of unease for Boston commuters. *As evidenced through threads on /r/boston, a forum on reddit.com for the Greater Boston Area, you’d almost guess that tension never really fully goes away—I am speaking of the tension between drivers and cyclists. Among the vitriol, insults and threats that are thrown back and forth between both camps, one wonders why the mutual distaste is so strong—after all, Boston doesn’t even rank in the top 15 cities for bike commuting (from 2008-1014 census data), coming in at 1.7% of total commuters.

While I counted down the days to bike weather this year, I sometimes found myself perusing these online flamewars for research in an attempt to rationalize the sour state of affairs.  One video catches my attention—it talks about the Dutch’s cultural shift towards car-centric roads during industrialization, after a long history of roads being for people. Subsequently there was a backlash after previously safe areas become dangerous, particularly for young children for whom roads often served as de facto playgrounds. This was only a small part of the picture—there were a multitude of reasons why the Netherlands moved towards dedicated bike lanes and bike highways for commuters and casual riders alike. There was a looming energy crisis, and a rising middle class who wanted, and eventually demanded, dedicated bike infrastructure in the form of “critical mass”-type protests. Boston’s limited body of bike-based commuters, as well as the city’s poorly maintained and misaligned streets, left me wondering if Boston would ever reach peak demand for cycle infrastructure on a large-scale.

Later, online, I heard from a cousin who lives in Minneapolis (the city with the third most bike commuters). She’d posted an article positing that helmets actually may create more danger for riders. By providing a culture that insists cyclists behave like vehicles and become responsible for avoiding larger, faster vehicles, the argument goes, we are allowing drivers to avoid the responsibility of needing to share the road. I’ve heard the idea before, and this particular year, it resonates with me again in a way that could only be painted by my own commute as a cyclist in the Boston area. 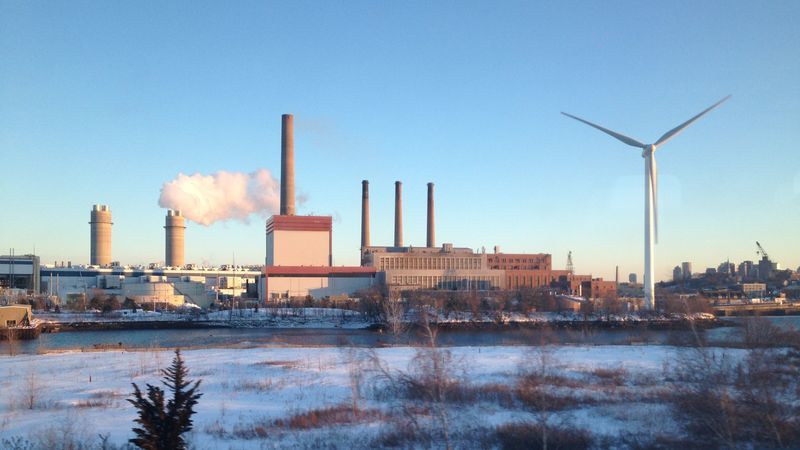 Everett, a hodgepodge of weary-looking converted Victorians and tenement houses, interspersed with small shops and garages, an MBTA bus facility, and project housing, sits sandwiched between Malden and Chelsea, with Rte. 99, (Broadway) running through it as a main vein. To the Northeast, it shares a small border with Revere, and with some perseverance, you can bike to the beach from our apartment in half an hour. One of the greatest joys of I’ve had of discovering new neighborhoods, I’ve found, is to explore it on a two-wheeled journey. When I moved to Everett, its terrain was no exception to my exploratory urges.  Given that this semi-industrial neighborhood is surrounded on most sides by highways, and my apartment perched squarely at the summit of a large hill, that exploration was not without some difficulty. As far southwest as you can go on our side of the Mystic, a small strip of Broadway has been annexed by Boston, giving way to an energy plant, pump center and a 231-ton turbine. From this entry point into Everett, north up Broadway until the next main rotary (not far from Wellington Station), there’s a bike lane made precarious by the relative speed of the careening eighteen-wheelers headed towards Boston, periodically spitting up bits of gravel at passersby. There’s no posted speed limit—I’d say the average is 40 mph—and as a result, drivers cut cyclists off when veering into McDonald’s or a gas station, and since there’s no parking, occasionally, drivers park in the bike lane. These examples of carelessness aside, the behavior of drivers can sometimes boil over into outright hostility.

In early April, on one of the first warm days, I cycled by a car parked in the bus pull-off at the intersection near my house. I kept right of the main lane of traffic putting me just in front of this vehicle. As the light changed, the driver subsequently tried to pass me (or possibly run me down?). “Get the fuck out of the road!” he growled throatily while speeding off, despite the fact that I’d given a wide berth, and he could have easily waited to pass. The driver was surprised to see me approach his window at the next light. “I didn’t catch what you said back there.” I bluff, and he simply swore again. I tried to explain that what he did was illegal, but it fell on deaf ears as he sped off. Though this anecdote paints a poor picture for the state of cycling, Broadway is possibly even worse for pedestrians. In the past two years, in my neighborhood’s portion of the route alone, there have been one fatal and several near-miss car-on-pedestrian incidents. Even though our stretch of road is largely hedged by a suburban family neighborhood, cars will sometimes max out at 50 miles an hour, even after dusk brings on lower visibility, careening over crosswalks concealed by inclines and the limits of observation. 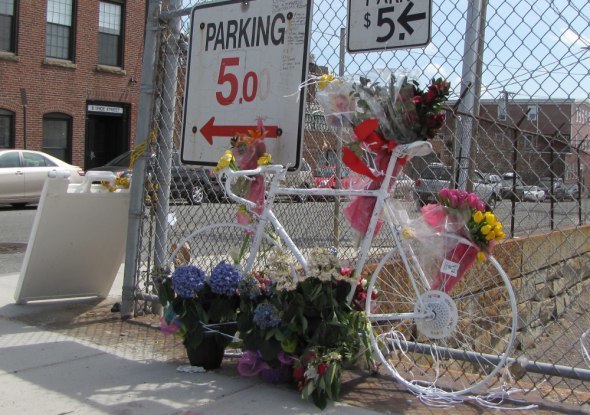 A “ghost bike” memorial in Sullivan Square where a 30-year old was struck and killed by a garbage truck, which then fled the scene.

Last summer marked my first full year living in Everett and a new job, so I started to get serious about commuting. In colder months, I tended to use the 104 and 109 buses for travel into Somerville, but these two lines are some of the worst for reliability, perhaps only second in infamy to the 66 (in Allston). Oftentimes, at Sullivan station, where the northbound version of both buses pick up, riders will wait over an hour for either bus, at peak times, only to be crowded on to a single bus all at once. You can chalk it up to bunching, but I’ve seen over 100 people try to fit on a single MBTA vehicle, their fares disregarded out of embarrassment or possible appeasement on the part of the driver. Given the  chaos of our public transportation (which, since winter, has grown to infamy), plus the fact that I planned to stay in the area indefinitely and I had no car or plans to buy one, I defaulted to cycling whenever possible.  I bought a hybrid road/mountain bike with finer-grained gear settings, which made some of the rougher patches of the first leg of the journey, up to and including the notoriously bike-unsafe Sullivan Square to McGrath Highway, much more feasible than my old three-speed cruiser. Though I continued to use Broadway, it was on one of my aforementioned exploratory journeys that I stumbled across the Northern Strand.

Riding north up Bryant St. towards Melrose in Malden, I saw a small stop-sign in the middle of the road, and what looked like a community garden. Thinking somehow I’d been teleported and ended up in my former neighborhood and pedestrian heaven, Somerville, I approached perplexed. What I found was a paved path, stretching from east towards Malden Center and west towards Revere. I was giddy, for sure—in a trance, I rode all the way to the end of the path, which terminated not far from the aforementioned heavily truck-trafficked rotary on Broadway. Here there was an informative sign about the trail and its current state of construction. In essence, an old abandoned rail line once followed this path, and the trail was an effort to reclaim it. I turned around and rode the trail all the way to its other terminus in Revere, then excitedly back home. It was unfathomable this trail could be 4-5 blocks from my house without my knowing—and for a recent Somervillian transplant, this was profound. I had been sure that the place I lived in was at most ambivalent towards cyclists, now I got to happily eat my words.

Later, I looked up the Northern Strand website, found a simple blog asking for volunteers, and eventual plans to stretch the path to the coast. The stated plan was to take the trail through Everett, Malden, Revere, Saugus and finally, to the coast in Lynn. What it meant for me was convincing enough, but the implications for the community were even greater. For those who can’t afford cars, living in one of these North Shore towns can be prohibitive—public transportation is unreliable and every other method of transportation is dangerous. On top of that, an only occasionally interrupted trailway for people and motor-less vehicles, has already seen great success in the area, i.e. the Minuteman Bikeway. That summer, I used the Northern Strand to skip half of my normally exhausting trek up and down Broadway’s biggest hill, and gladly awaited its future expansion.

Cue the winter from hell which never ended and we’re almost back up to the current day. This spring, as soon as the snowbanks finally receded from the bike paths, I visited the Northern Strand website once again, which seemed to have consolidated all of its branding under the slogan “Bike to the Sea” [biketothesea.com]. There was a video showing recent “cleanup” of the Route 1 underpass in Revere, which largely consisted of painting over the graffiti on the bridge supports which I found unfortunate; local art adds to the allure of the trailway. There wasn’t much news on the current state of the trail. The last time I visited the end of the Malden trail, it seemed a bit too rough to take my cruiser on any further, so I turned back. Today, though, it was just me and my hybrid, so I decided to take the risk of a popped tire and bike over the partially finished and missing portions of the trail. I carried my bike downstairs through the chilly foyer of my apartment building, which seemed to still house some of winter’s cold dread. The chill left me shivering slightly, even as I started off, coasting through the balmy heat down the congested artery of the city, towards the beginning of the Strand.